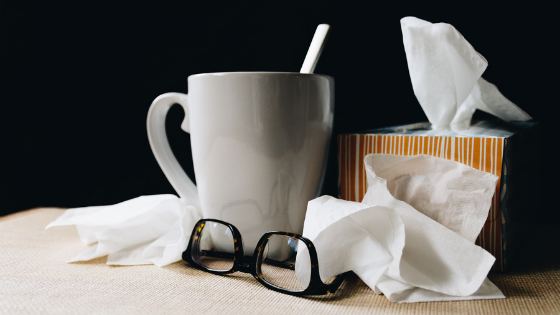 The first Monday in February has been dubbed National Sickie Day in the UK on the account that, statistically, this is the day that most people will phone in sick. It is estimated that 350,000 British workers will call in sick today costing the UK economy around £45million.

The most popular excuses given include colds, flu, back pain and tummy bugs but is this really what’s going on?

Here are the four key areas causing high absence rates on National Sick Day and some of the things employers can do in future to reduce absence.

It’s the time of the year that many people come down with a cold or flu, and office space is ripe for sharing germs. To beat the germs and help reduce sickness in the workplace make a start by tackling these five germs hotspots:

The cold weather can also aggravate old injuries and conditions such as asthma, arthritis and fibromyalgia. Flexible and remote working make an enormous difference to employees with such ailments.

A poll taken by ITV in 2014 found that while colds, flu, and food poisoning were the most popular excuses for National Sickie Day, respondents divulged the real reasons they had called in sick. Of those interviewed, 46% stated that ‘feeling tired’ was the real reason and 40% also said ‘they just didn’t feel like it’.

Culturally, physical ailments are much more readily accepted than mental health ailments and therefore, it much less likely people will say that their mental health is suffering and they need a day to recharge.

More and more organisations are introducing “duvet days”, which enable people to take that much needed time out on short notice without feeling the need to make up an excuse.

Is it a coincidence that so many people call in sick the first Monday of February when, for a large number of people, it is the first payday weekend following Christmas and the end of Dry January?

Whilst employees are free to go out and indulge in their own time, employers can do more to educate employees on the negative effects of alcohol on their body, their sleep and also their mental health.

Interviewing for a New Role

Hyper Recruitment Solutions (HRS) boss and Apprentice 2012 winner Ricky Martin, claims that people aren’t calling in sick because of ill health but because they are attending a job interview. HRS report that around 25% of February’s interviews will take place on the first Monday in February.

Many people re-evaluate both their career and their lives generally after Christmas and spend much of January planning career changes and applying for positions.

If people are applying for new roles, in all likelihood they have been disengaged for some time. As an employer it is necessary to determine why people are disengaged, what you can do about it and make sure that you take action to improve engagement.

If you would like to discuss how Delphinium can help you to reduce absenteeism and presentism, and increase engagement in the workplace call us on 0161 949 9736 or email us a enquiries@delphiniumcc.co.uk.